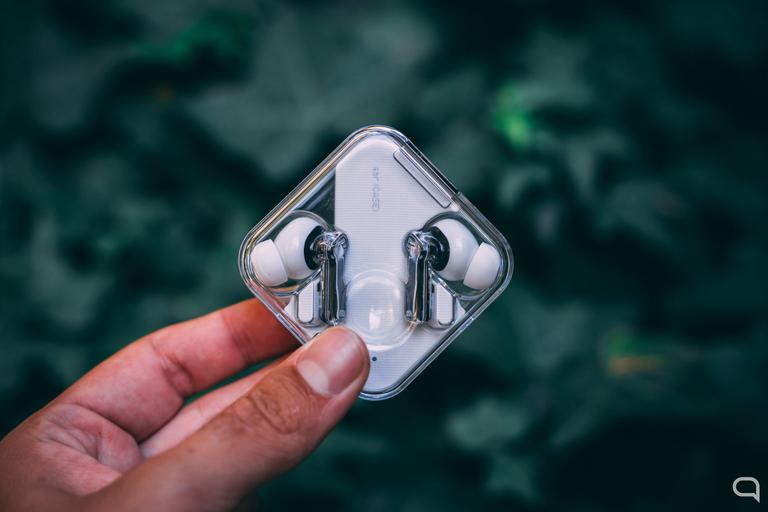 After leaving OnePlus, Carl Pei decided to start a new stage with the creation of Nothing, a technological startup that, as he himself described in an interview with CNET, wants to differentiate, among other things, for the design of his products. The first stone on that road are Nothing Ear (1) True Wireless headphones that have the ambition to compete with products as well known as Apple Airpods Pro or Sony WF-1000XM4.

To try to compete, Nothing has established three pillars: They have opted for a striking design that allows them to differentiate themselves from a full-looking competition, they have allied with Teenage Engineering and, in addition, have decided to sell the product to only 99 euros, a quite successful price in relation to what they promise.from the moment I could know the specifications of the Nothing Ear (1) and, especially, since I started to try them, an idea has been expanding through my mind . The aftertaste left by these headphones, the random's approach and the aura that surrounds them reminds me enough to what it was trying to project OnePlus in its beginnings. They want to be different, they insist on well-made products and, in addition, adhere to the equation with a price lower than their rivals.

Such is the resemblance that the conclusion after trying the Nothing Ear (1 ) it would have been completely valid for any of the products that OnePlus threw to the market years ago. These headphones are not the best in absolute terms, but, in their price range, yes they are one of the main options to consider.

One of the things to pay special attention when a product arrives to evaluate is to check the quality of construction. In the case of the headphones, it is usual to find details that are not well topped - such as the firmness of the hinges, the strength of the magnet or the closing sound.

In the case of Nothing Ear (1), everything is quite well resolved. Better even than in some more expensive products. The hinge does not dance, the magnet is firm, the different parts are well assembled ... and that we must add a design that, the less, it is striking.

The shape of the headphones is not too different from the one we have seen in other headphones such as the airpods pro or freebuds pro, but the transparent finish, added to some minor details, makes them look a lot Cool. And that, in addition to being important to attract consumers, allows them to be recognizable, which, as it said, is super complex at this time.

The box, by the way, is quite light, although it occupies A little more space than that of the Airpods Pro, for putting a reference. Despite this, it is still a pretty portable case that goes unnoticed in most situations.

My main concern in this sense is how it will age the transparent plastic from which the box is made. Yes, it's quite striking. And yes, revealed all the circuitry. But these products usually accompany us often in your pocket, perhaps with keys, coins or other objects around you. That is, they are quite exposed. If the case was, for example, white, that wear would be more unnoticed. But in a completely transparent box, I'm afraid that, after a while, scratches will be more visible than perhaps we would like.

Nothing Ear (1) have a noise cancellation system that supports In three microphones to capture the sounds from the outside and, subsequently, generate a signal signal of similar characteristics that annul the noise when entering the ear canal. To achieve proper functioning, Nothing Ear (1), in addition, have silicone pads that, in addition to holding the handset, help isolate the inside of the ear.

Let's be honest: the operation of the system Noise cancellation does not reach the Sony WF-1000XM4 excellence - Reyes in this area. However, it is possible to mitigate a reasonable percentage of the sounds coming from abroad, so we could say its performance is good considering the range to which they belong.

The same happens with transparency mode. Is good enough to maintain a conversation without having to take off the headphones, but the experience does not become as natural as, for example, with the airpods pro.

about the various modes of ANC I would like Make, in addition, an indication. For some reason - Probably, some problem in the firmware-, the headphones are not always in sync. That is: Occasionally, the right handset is in a mode (for example, the noise cancellation), while the left is in another (for example, that of transparency). Usually, it is enough to introduce them into the box and take them out again to be resolved, but it is something that should not happen. I imagine that nothing will solve it With some software update.

As regards sound quality, the conclusion is again the same. They sound well compared to other products of the same price range, but do not get to equalize the performance of the reference headphones, which, if you pay attention, achieve a more clear and balanced sound.

where If they equate -E even come to overcome rivals much more expensive is in autonomy. Nothing EAR (1) promise up to 36 hours without noise cancellation and up to 24 with this active system. Some figures that, to a greater or lesser extent, coincide with what these headphones deliver into practice.

As it said at the beginning of this article, these headphones remind me in many ways to the beginnings of OnePlus. They are not the best in absolute terms, but probably, if they are one of the best options in its rank.

Aesthetically it is a quite attractive product, as well as recognizable. Functionally, it exceeds many alternatives that we can find in its same price range. And if you want to spend about 100 euros in headphones with ANC, these are undoubtedly an option to consider.